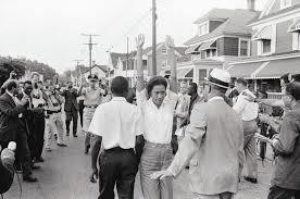 This conversation takes three giant steps beyond the leading-man narrative of the Black Revolt by restoring the biographies of Louise Thompson Patterson and Gloria Richardson and by examining women in the Nation of Islam. If Patterson and Richardson made front-page news, then who buried the story of their leadership in the freedom movement? Join us for a conversation on how these women negotiated racism, patriarchy, the US class system, and a Cold War world and forged their own freedom dreams.

Joseph Fitzgerald, author of The Struggle is Eternal: Gloria Richardson and Black Liberation

Keith Gilyard, author of Louise Thompson Patterson: A Life of Struggle for Justice

Ula Taylor, author of The Promise of Patriarchy: Women and the Nation of Islam

Join this conversation as we lift up the path-breaking radical black feminists Barbara Smith and others in the Combahee River Collective with an eye toward liberating the future. Activists like Ella Baker and groups like the Combahee River Collective pioneered intersectionality by combining antiracist and women’s liberation movements. Together the panel will consider the long legacy of radical Black feminism and the visions it offers us for current struggles like Black Lives Matter today.

Keeanga-Yamahtta Taylor, editor of How We Get Free: Black Feminism and the Combahee River Collective

Why are Black women invisible in the story of peace and internationalism? The time is ripe to tell the stories of Black women who forged global networks, saw the Black Freedom struggle in an international dimension, and took leadership in the peace movement and anti-colonial movements. Join us to hear about the work of Amina Baraka, Charlotta Bass, Amy Ashwood Garvey, Amy Jacques Garvey, Queen Mother Moore, Mittie Maude Lena Gordon, and many others.

Keisha Blain, author of Set the World on Fire: Black Nationalist Women and the Global Struggle for Freedom

John Portlock, author of "Charlotta Bass and the California Eagle" (in The Strange Careers of the Jim Crow North: Segregation and Struggle Outside of the South)

May 2 - The Struggle Against Police Brutality, Mass Incarceration, and Educational Discrimination in the Jim Crow North

Asked to name the heroes of New York's civil rights movement, most New Yorkers would be hardpressed. And yet institutional segregation and systemic inequality defined the city in housing, schools, and policing so activists like Mae Mallory and Ella Baker and organizations from the NAACP, to the Nation of Islam, to the Communist Party built movements to address these inequalities. Join us as we examine the history of the Jim Crow North and the long struggle to right the injustices of the criminal justice and educational systems.

Kris Burrell, "Black Women as Activist Intellectuals: Ella Baker and Mae Mallory Combat Northern Jim Crow in New York City's Public Schools during the 1950s" in The Strange Careers of the Jim Crow North: Segregation and Struggle Outside of the South

James Forman, author of Locking Up Our Own: Crime and Punishment in Black America

Brian Purnell, editor of The Strange Careers of the Jim Crow North: Segregation and Struggle Outside of the South

Clarence Taylor, author of Fight The Power: African Americans and the Long History of Police Brutality in New York City